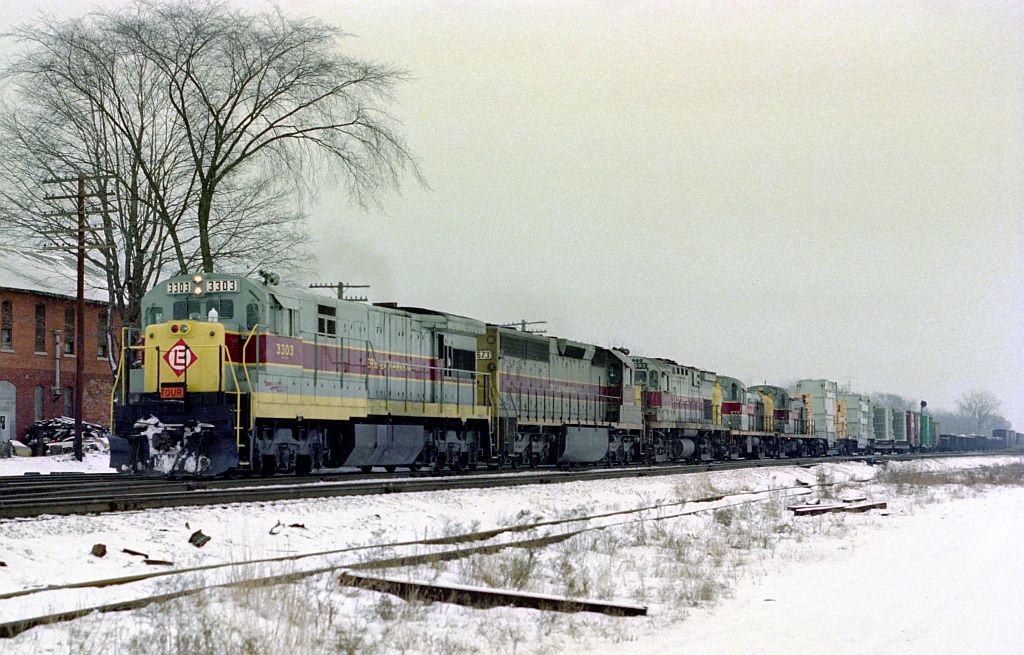 A well traveled unit even before Conrail inherited it, Erie Lackawanna U33C leads a westbound through Sterling, Ohio. This was one of those neat 3 builder consists- GE U33C, EMD SD45-2, Alco C424 and a pair of Alco RS-3's. The paint job is pretty fresh on the 3303 as it was returned from several years on the Delaware and Hudson in late December 1975 and repainted EL. It was part of a trade that sent 3 GE's to the D&H in exchange for 3 SD45's. The SD's would run on the EL in their D&H numbers of 801,02, and 03. The 3303 was renumbered 753 while on the D&H. This swap lasted until just before C-day when it was "undone" and the units sent back to the original owners. The 3303 would become Conrail 6566 and be one of only a handful (the ex Auto Train U36B's come to mind) that would have Mars lights on the nose.
Photographer
Roger Durfee
Photo Date
03/03/76
Photo Location Name
Sterling tower
Conrail Road Number
6566
Builder
General Electric
Predecessor Paint Scheme
EL
See More
Conrail Scenic and Action Photographs Roger Durfee's Conrail Photography Roger Durfee's Early Conrail Action
Conrail Locomotives General Electric - B, C and U series GE U33C