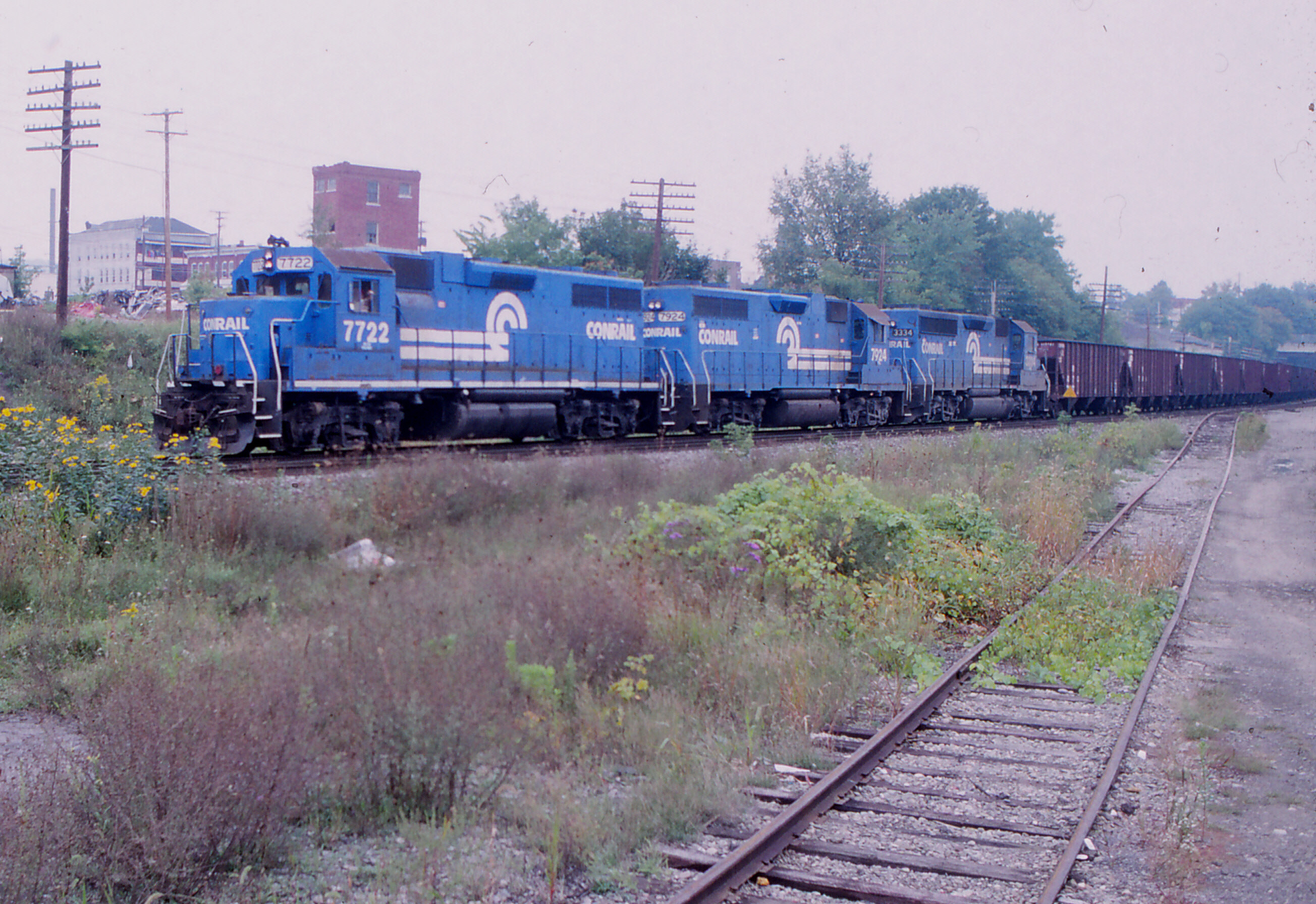 A trio of EMD's have 87 loaded hoppers at a breakneck 10 MPH on the ex DLW main through Johnson City as theyhead to the NYSEG GoudyStationon what has since 1959 been the Vestal Spur, first after DLW abandoned their main line from the west side of Binghamton to Corning in favor of trackage rights on the Erie, through the EL years, and now into Conrail. The remaining customers on the line, which now extends only as far as Old Vestal Rd in Vestal, are the NYSEG Goudy plant, where these cars were unloaded, and National Pipe and Plastic, across the Susquehanna in Vestal. Every time I saw this line-which was almost daily-I would imagine a pair of DLW E 8's skimming through with Phoebe, or a brace of F 3's with a long freight. Hard to picture from this view. Interestingly, a couple years after NS got the line, it put a serious effort into tie replacement. I'm betting there had been no programmed track maintenance on the line since EL days, perhaps not even then. Conrail restricted the line to 4 axle power, and it was not uncommon to see a solo GP 38 or 40, sometimes a B23-7, depending on what local power was in favor at the time, with 45 car cuts here. NS was intent on using C40-8's for just about everything, even locals,and would run road power down to NYSEG. I have shots of C40's and SD60's here bringing loaded coal trains to the plant. It was for naught, as the plant closed a few years later, when it became uneconomical to operate, and too expensive to retrofit for pollution controls. The future of the Vestal Spur is now in question.
Photographer
Tom Beckett
Photo Date
09/17/94
Conrail Road Number
772,279,243,334
Builder
EMD
See More
Conrail Scenic and Action Photographs Tom Beckett
Conrail Scenic and Action Photographs Tom Beckett Conrail in the Southern Tier
Conrail Locomotives EMD - GP, SD, SW, F, and MP Series EMD GP38
Conrail Locomotives EMD - GP, SD, SW, F, and MP Series EMD GP40-2
On Location with Conrail Conrail's Southern Tier Line