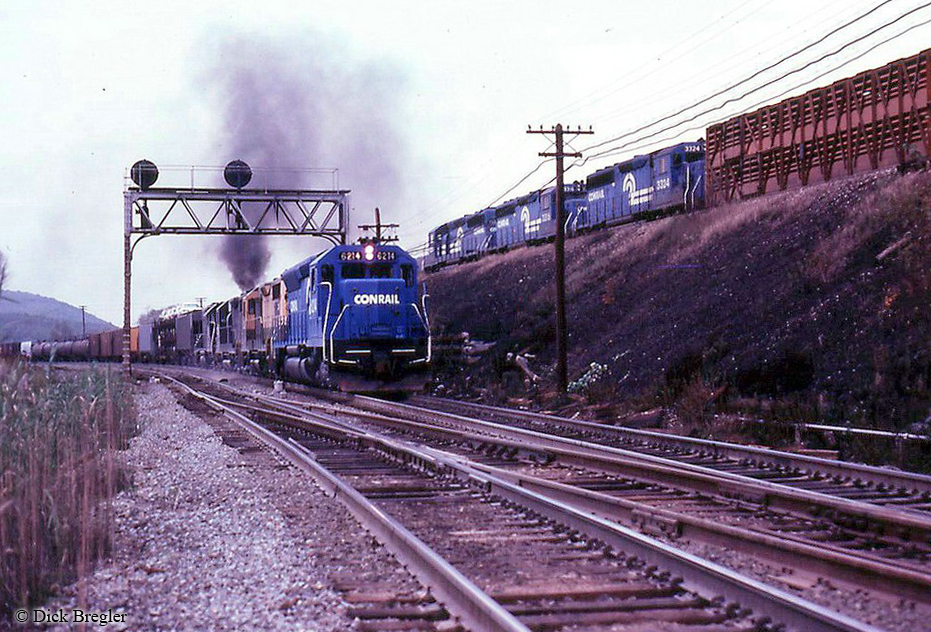 Back in 1979, a trio of new GP40-2s (including 3316 and 3324, both Phase II units built in May, 1978) keep an eastbound TV train in check as it descends "The Slide", a stretch of 2.37% grade that restricts trains to a maximum speed of 12 mph, due to the wreck of the Pennsy's Red Arrow on Feb 18th, 1947. That day, 24 people perished and more than a hundred were injured after the eastbound Red Arrow lost its brakes on the slide and jumped the tracks at Bennington Curve. The track beneath the overpass is the old New Portage secondary, a second route up the east slope that ran south out of Hollidaysburg via the much-less-famous Muleshoe Curve. Much of the old New Portage Secondary route is now used by the new alignment of US Route 22. Of particular interest is the first car in the train, one of the 86' double-level stock car that were seen ferrying delicious cows between yards in the Midwest and slaughterhouses in North Jersey and Philly until the early 1980s.
Photographer
Dick Bregler
Photo Date
01/01/79
Photo Location Name
Pittsburgh Line
Conrail Road Number
33,163,324
Builder
EMD
See More
Conrail Locomotives EMD - GP, SD, SW, F, and MP Series EMD GP40-2